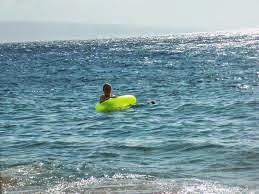 Today in the morning they went to golden beach, Nanha went directly to water and after some hesitation she also joined him. Tides came with great force and took them back to the sea shore. She remembered their journey from Calcutta to puri by jagnnnath express, that day in Kolkata the had visited Niko park and science city with one of jun’s friend’s family. In fact they came to see  them off also. Due to train accident some where  their train reached ten hours late. Train journey was boring, it was  sleeper class and their co-passenger one Bengali family was unclean and uncultured, so when train reached puri they were so happy, and guest house is very clean and comfortable. Here sea is very violent,it was amazing to see the waves, which came with great force and then became calm within seconds. Market on the shore is very big and colorful. They strolled for some time and saw typical oriya handicrafts. There are so many hotels. Raj bhavn, All India Radio, Circuit house were also on the way. Puri seems to be a clean and pleasant resort.